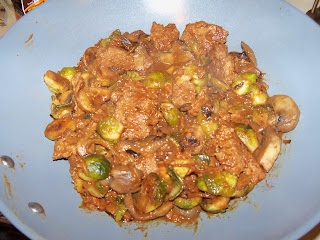 I was all set to make Seitan & Broccoli with Pantry BBQ Sauce tonight.  I had 3 balls of Savory Seitan in my freezer, so I pulled one out and defrosted it in the microwave.  I had 3 stalks of broccoli that I needed to use ... a day ago.  :::sigh:::  Soooooo, I improvised.  I looked to see what other veggies I had.  I pulled out a pound of Brussels sprouts and about 6 oz. of sliced mushrooms.

I followed the recipe pretty closely, except that I added the Brussels sprouts to the pan after the onion had cooked.  Then, I added the mushrooms after about 5 minutes.  I totally forgot to add the garlic, but it was good without it. Finally, I added the sliced seitan.  Some of it actually browned, but mostly it didn't get real brown, just nice and hot.  I added the sauce and let it simmer for about 5 minutes.  VOILA!  The most delightful dinner.  I did not put mine over rice, but just ate it as is.

I have to say that the BBQ sauce was a very nice compliment for the Brussels sprouts.  In fact, I think this BBQ sauce would be good on a lot of foods, including burgers.  It is very tasty!  This was an excellent choice for dinner.  I'll definitely make this again with any veggie I happen to have on hand.
Posted by Lori at 9:18 PM