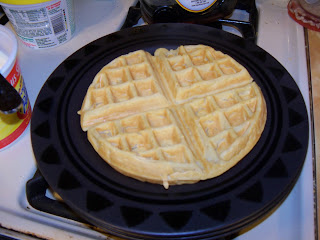 Sunday morning is big breakfast morning.  After two consecutive weeks of pancakes, today I made waffles.  I chose Naked Vegan Waffles as my new recipe to try.  As you can see from the picture above, the finished waffles look perfect.  They didn't stick to the waffle iron and they were the perfect "chewy" waffle that my sons love.  They also were quite tasty.  The combination of ingredients produced a perfect, plain waffle that didn't have the metallic taste that I tasted in the pancakes. 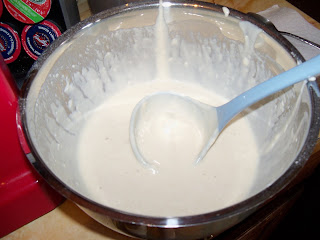 The recipe called for soy milk, but I don't stock that (ever), so I used coconut milk.  Basically, I used that over the almond milk I had in the fridge only because I wanted to use it up.  I suspect almond milk would have been just as good, if not better, as I feel it adds a twinge of sweetness.  I'll use that next time.  I may also add a bit of vanilla.  The recipe does not call for any vanilla at all, and generally, I like that in my waffles and pancakes.  The batter was a little thick at first, so I added another splash of coconut milk. 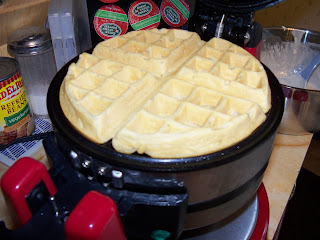 I ladled the batter into the waffle iron after spraying both sides of the waffle plates with olive oil.  I have a double decker waffle iron, so I can make two waffles at the same time, which is very nice considering there are 3 of us in the hour.  The picture above was taken right after the waffle iron beeped that the waffle was done.  I didn't have any problem at all with sticking, and the waffle was perfect. 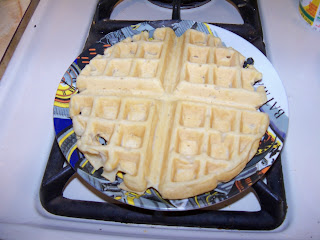 This was the first waffle, where I didn't carry the batter all the way through to the sides like I should have.  However, it didn't affect the taste.  (Like the Batman plate?  It's a leftover from when my sons were small. :)

This is an excellent, basic waffle recipe.  I couldn't tell any difference between this waffle and those I have made with eggs.  I topped my waffle with some vegan light margarine and some homemade pear syrup that I had made and canned at the end of August.  It made a very tasty breakfast.
Posted by Lori at 10:20 AM