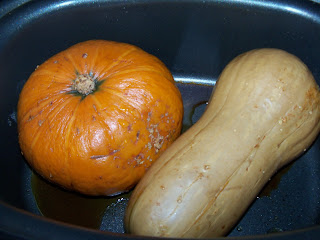 I have a variety of squash at my house.  I have a spaghetti, butternut, acorn, and red kuri squash along with a pumpkin pie pumpkin at my house.  I've had these squashes for weeks.  OK, some since mid-September.  I figure it is time to start using them.  So, I threw the red kuri and butternut squashes in my roaster that doubles as a slow cooker, and slow cooked them for 8 hours today.  I knew I wanted to make soup or risotto or something with the red kuri squash as I've never had it before. 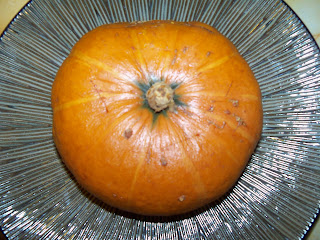 So, I put it on a plate to remove the skin.  I really wonder why I needed to remove the skin.  The skin was extremely thin and was almost as tender as the squash flesh.  I think next time I roast one of these, I'll leave the skin on it.  I've seen recipes that use it unpeeled, so that's what I will do.  It was an absolute M-E-S-S to peel the thing. 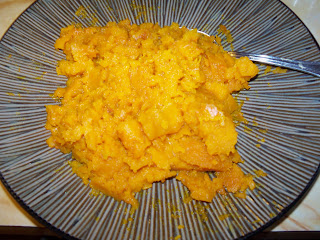 After looking at MANY recipes (and bookmarking a few of them), I decided to make Roasted Red Kuri Pumpkin & Coconut Soup.  Technically, I don't think the red kuri is a pumpkin, but it kind of looks like one.  What I can say, regardless of the title, this soup is the BOMB!  LOVE IT! 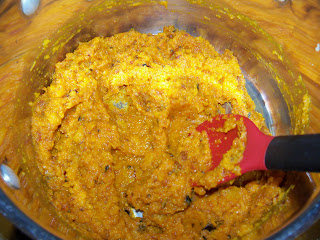 It took a bit to put it together between chopping shallots, mincing garlic, and grating ginger.  I was supposed to "crumble" a dried red pepper in with the shallots/garlic/ginger, but I discovered that my pepper wouldn't crumble.  Oh it's dried and has been sitting in a cellophane pocket for months, but it was still a little gummy. So, I chopped the CRAP out of it and added it. 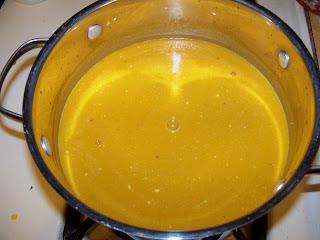 This is my first recipe using coconut milk.  I bought a can for something (I have no clue what), and finally used it today.  When I first put the coconut milk in the soup and tasted it, I could taste the coconut strongly.  After simmering for 30 minutes, it no longer has a strong coconut taste.  While I did add the lime juice, I only added 1 tablespoon, not two.  Also, I didn't use the garnishes.  Maybe they add a ton to the soup, but I have to say, I absolutely LOVE the soup without them. 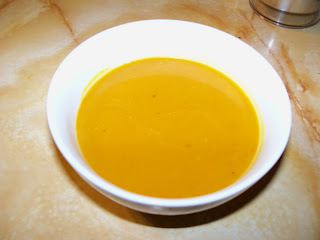 This soup is a keeper and will be a repeat in my house.  There is a link in the comments for the blog entry for this soup for a butternut squash soup.  It's called Spicy Butternut Squash, Apple and Coconut Milk Soup.  Since I already have a roasted butternut squash, I'm thinking this is my next soup.  Although, this soup uses far less coconut milk, which is a good thing.  I could probably get away with using 1/2 cup of almond milk.  I'll keep you posted. :)
Posted by Lori at 9:51 PM