It's been a long 7+ months since the last time I posted.  I had a major issue crop up in my life that took me completely away from the life I knew and led me on a new path.  I'm finally making my way back here.  :::smile:::

During the last 7 months, I have cooked occasionally.  Actually, I've cooked more than occasionally, but didn't take pictures or have the energy to blog about it.  I'll recap now, though. 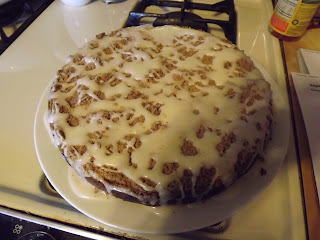 In February, I made a Blueberry Streusel Cake with Lemon Icing.  While it was tasty, it wasn't a dessert that my sons appreciated, so only a couple of slices were eaten.  (I mean, really, how much could I eat?!?!?) 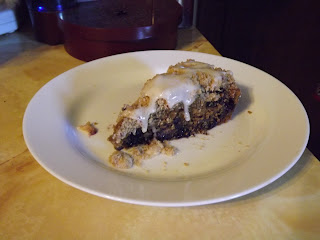 I would make it again, but before I did, I'd make sure that I was making it for a crowd that likes blueberries and lemons.  The combination is very refreshing. 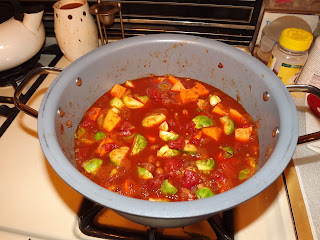 In March, I made a chili that had a combination of veggies that I couldn't imagine would taste good together.  Why I made it, I'll never know, but I'm glad I did.  I LOVED IT!  I made Chipotle Chili with Sweet Potatoes & Brussels Sprouts from Appetite for Reduction (p. 238). Luckily, the recipe is on theppk.com, and I've included the link for you here.  I will be making this again this fall/winter.  It had such a great flavor and just enough zing for me.  I highly recommend this chili.  I know it sounds weird to put both Brussels sprouts and sweet potatoes in chili, but it was excellent.  Sometimes it really pays off to walk outside of my food comfort zone and try something totally new. 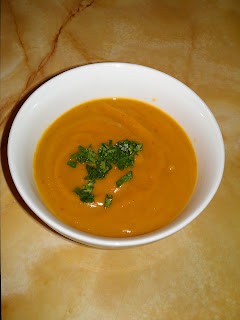 In April, I made Creamy Avocado and Sweet Potato Soup.  It was pretty tasty.  I like a creamy soup now and again.  It was a good way to use up the avocado that was reaching the end.  In fact, I have an avocado and a sweet potato that I need to use.  This would be an excellent soup for his week. 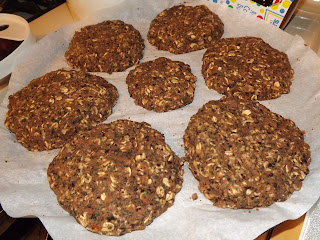 In May, I made New York Times Veggie Burgers.  These were quite tasty.  My oldest son loved them.  I made 6 regular burgers and 1 baby burger.  I got to eat one of the regular burgers the day I made them and the baby burger a week or two later (I froze the leftover burgers), but my son ate the rest.  I need to make these again. 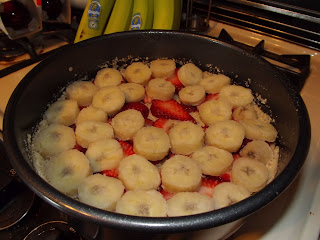 In May, I also made a Banana Crumble (recipe at the bottom of the webpage). I added sliced fresh strawberries to it.  It would have been good with half or even a third of the crust listed in the recipe.  There was WAY TOO MUCH crust on this and not enough fruit/filling. 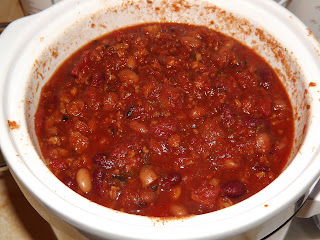 Finally in May, I made Ole-Fashioned Chili Beans (click on the 169 and it will take you to the recipe) from Quick and Easy Low-Cal Vegan Comfort Foods. The chili is a bit on the spicy side, but good.  I made it because I was going to make Chili Cheese Fries (page 165 of the cookbook), but I ended up just eating the chili.  I have some of the chili in the freezer and need to thaw it so I can make the Chili Cheese Fries.  All of the recipes in this book have less than 350 calories.  I still need to make the Seitan Cheesesteak that is pictured on the front of this cookbook. 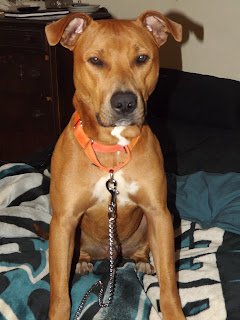 This isn't something I cooked, but this dog is something I acquired.  This is Gumbo.  No, he is not my dog, but I have been fostering him since May 12, 2012, so just about 4 months now.  Fostering has been very rewarding and challenging.  Gumbo had been in a boarding facility for just about 6 months. At the time I brought him home, he had lived almost half of his life in a kennel.  (He was just over a year old.)  He's put on weight and is a loving dog to my family, but he has stranger issues.  He's good with my two girls (the black lab and rottie/shepherd).  Although we love Gumbo, he's not a forever dog for us. I'm really hoping that we can help him on his way to finding the perfect home for him. 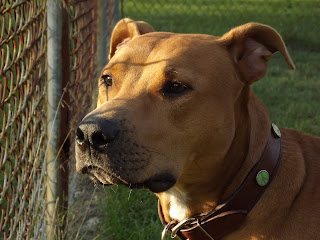 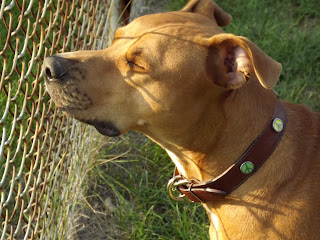 These are two pictures of Gumbo in August.  He's relaxed a lot in the past four months.  I can tell he didn't know a lot of love early in his life because it took him a long time to connect with us.  Now, he has and he is an attention hound who thinks, at about 60 or 65 pounds, that he IS a lap dog.  :) 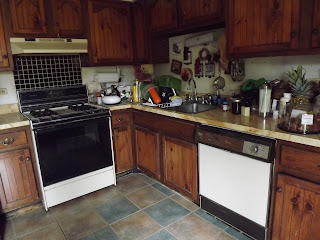 In July, I decided enough was enough with my appliances.  My oven stopped working.  The gas would come on, but the electronic ignition wouldn't light the oven burner, so I'd just smell natural gas.  That's not a good thing.  The oven did that once, but then lit up when I tried to light it again within a few minutes.  It worked for a week or two without problem, but then it started acting up again.  I couldn't mess around with natural gas.

My dishwasher was over 30 years old.  I believe my house was built in 1978, 1980 at the latest.  The dishwasher was the original one from when the house was built.  It hadn't been working well for a while, but I scrubbed the dishes before I put them into it.  It still left streaks.  I was just tired of it and knew I needed a new dishwasher.  Plus, it sounded like a jet engine when it ran.  It was extremely noisy. 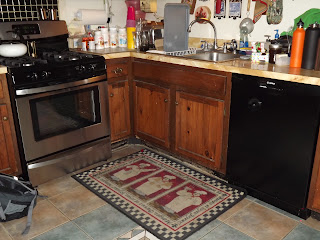 I bought a stove and dishwasher in one sitting.  The stove crapped out for the last time on Saturday and I was using a small electric convection oven to bake.  Sunday night, I went online searching for a sale and found one at Sears plus 12 months no interest financing.  I bought a stainless steel stove with a black top and a black Bosch dishwasher that is so quiet, we can't hear it when it's running.  It has a red light that shows on the floor to tell us the dishwasher is running.  My fridge is black, so everything matches nicely now.  I swear the new appliances even make the 30+ year old cabinets look better.  :)  I love them both. 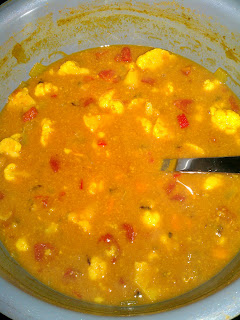 Of course I needed to try out my stove, so I made Curried Cauliflower and Sweet Potato Soup from the Fat Free Kitchen Vegan blog. This is one of my favorite soups.  It hits the spot no matter when it's made during the year.  I also made Smoky Refried Bean Soup from this website, but I have no pictures of it.  I made it during the summer (June), and I liked it very much.  It's a heavy soup though, and really best suited for the winter months. 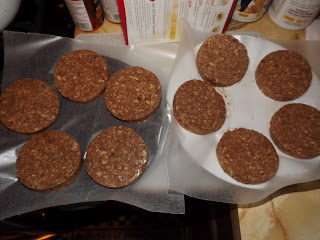 I made Vegan Patties Like You've Never Had in late August.  These are made with nuts, refried beans, and oatmeal.  I made the burger mixture on one day, threw it into the refrigerator overnight, and then formed the burgers the next day.  The mixture was very sticky and soft the first day, so the overnight refrigeration was perfect.  I pan fried them for 5 minutes on each side, but they were still very soft burgers, so I ended up baking them at 350º for about 20 minutes.  That helped, but I ended up putting them back into the oven (it had been turned off for 15 or 20 minutes and had cooled down a lot) and just let them sit in there for another 20 minutes or so. 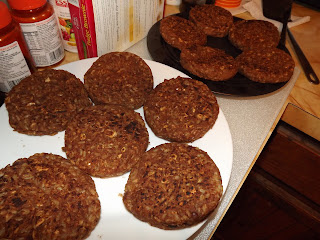 They froze nicely.  I had one tonight and it was firmer, but I wouldn't call these really firm burgers.  They are very tasty, though.  This recipe made 12 burgers for me, 12 good-sized burgers. 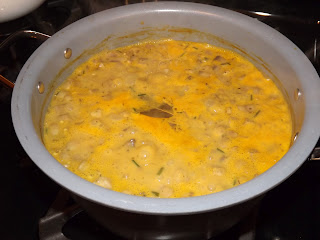 Last week, I made Leek Mushroom Potato Stew.  OK, I didn't have any leeks, so I used more onion and a huge handful of chives (I have a huge plant on my deck).  I put in 24 oz. of button mushrooms because those were the only mushrooms I had.  I used Yukon Gold potatoes, because I didn't have purple potatoes.  AND, while I had chorizo sausage that I could have used, I decided to use two links of Field Roast Apple Sage Vegan Sausage, that actually seemed to go perfectly with the flavor of the stew.

I liked this stew, BUT, I hated the pasta in it.  I will make it again, but I will not put pasta in it.  It was mushy and did not reheat well.  Otherwise, it was a lovely stew. I will look for some Field Roast Chipolte Vegan Sausage to use in it. I might like the extra zing. 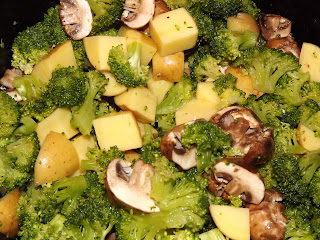 Tonight, I roasted broccoli, Yukon God potatoes, and baby bella mushrooms in a splash of olive oil, French gray sea salt, and pepper.  OMG!  I love roasted veggies and could have eaten the entire pan of them.  I tried to restrain myself and I saved a generous portion for tomorrow. 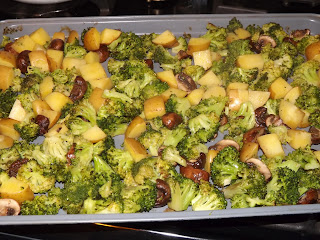 I ate them with one of the Vegan Patties Like You've Never Had smothered in pickles and a generous squirt of mustard.  It was a lovely dinner for a Monday night after a dentist visit in the afternoon.  bah!  I'm not a fan of the dentist, but I go when I'm supposed to.  I never want to have any kind of serious periodontal disease.  My ex-husband had perio gum surgery and it looked absolutely torturous. 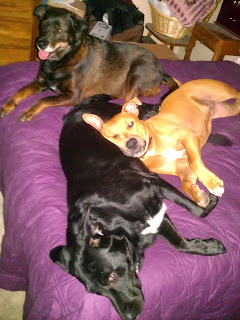 OK, that's caught me up to today.  I'm leaving you with a picture of the three dogs together.  As you can see, Gumbo (the lightest dog) thinks he fits right in.  :::smile:::