This is just a short note.  I've been gone for about 2 1/2 weeks.  I told you all earlier that my tried and true PC died (it's been a month ago at least), and I started using my son's old PC, which is actually faster than my PC.  After I had used it for about 2 weeks, Jordan, my rottie/shepherd, knocked over my PC tower and (I thought) damaged the hard drive as it wouldn't boot up and asked for a bootable disk.  (EEK!!!)  It took me a week to get it to the computer expert that works on my PCs and it turns out, Jordan only knocked a plug loose.  Whew! :)  Now that I have a working PC again, I'll be blogging again.
Hope you all had a wonderful summer and that fall has started out beautifully for you.  It's been rainy in Chicago all week, but we're supposed to have a beautiful weekend and sunny weather this coming week with temperatures in the 70's.  I can handle that! :)
Posted by Lori at 8:56 PM 5 comments:

A Tribute to Skittles

This is a sad post for me.  My 12 year old Yorkie, Skittles, passed away yesterday.  I took her to the groomer three weeks ago.  I remember when I was dropping her off that one of the dogs was coughing.  About a week or so ago, Skits started coughing a bit, so I thought she caught something at the groomer's.  But, she seemed to be OK and actually seemed to be getting better (eating and drinking), so I was just watching her.  Then yesterday morning, she had what looked to be a huge seizure and became unresponsive.  We wrapped her in a big towel and ran out of the house.  She died on the way to the vet's office in my son's arms.  The vet said he thought she had a heart attack and had a weak heart, which is strange to me.
Two years ago when I brought Jordan home from the Animal Welfare League, I discovered she had Kennel Cough the day after I brought her home (that's when she started coughing).  She gave it to Skittles.  It hit Skits very hard and I took her to the vet probably 4 times in a 3-week period.  She wasn't eating and I thought it was going to kill her.  But, the vet told me that Skittles had a strong heart and was in great shape and that he thought she would pull through, which she did.
Maybe the Kennel Cough weakened her heart or maybe her age just caught up with her.  I have no clue, but I can say I wasn't ready for her to go, not like this.  She had a wonderful life with our family.  She was an excellent dog with a lot of spunk and personality.  We will miss her deeply.
Skits never really liked Kobe, even though we got Kobe when she was 11 weeks old and was about the same size as Skittles.  Skits would bark at Kobe so hard and so fast, she would end up sneezing at Kobe.  They didn't fight, but it was a unique and interesting relationship.  We got Jordan when she was 10 months old and 50 pounds.  You'd think Skittles would hate her too, but she didn't.  Skits actually liked Jordan.
We love you, Skits Bits.
Posted by Lori at 11:14 AM 8 comments:

Soooo ... about a week ago, my older son told me that the PC wasn't working.  He was right; it wasn't.  When booting up the PC, we get a black screen with a blinking cursor.  This is NOT good.  Luckily, I have another PC tower.  My younger son blew the motherboard in his PC, so I had it replaced and something else replaced (goodness, I can't remember what, only that it cost me $150).  BUT, in the mean time, my younger son begged me to buy him a new "gaming" PC that would be better for gaming, so I did.  He used his old PC for about a week before he received his new one.  Then, it sat in my dining room until a week ago when my PC died.

Did I back up my PCs?  Well, yes, I did.  Did I do it recently?  Ummm ... no, I didn't.  It's been a year.  I'm afraid my hard drive is corrupt, but I'll still take it somewhere to try and get the pictures and documents off of the hard drive.  :::sigh:::  In the meantime, I'm trying to get my son's old PC up to speed with the programs I need.  It's actually a faster PC, with 4 gig of RAM.  My old PC only had 1 gig. I finally installed the picture software I need so I can blog again. :) 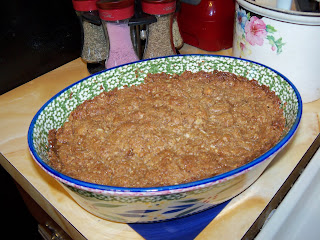 This holiday weekend, I was determined to be productive, and I have been.  Today, I did some laundry and cleaned out my pantry.  I dug deep to the back of the shelves and threw out all of the old canned goods, sauce mixes, etc. that were in the pantry.  It's amazing how much space there is when I threw out the old/expired stuff.  After that was done, I made a vegan apple crisp.  It's quite tasty, too!  I converted a recipe that I got from my ex-mother-in-law.  Here it is. 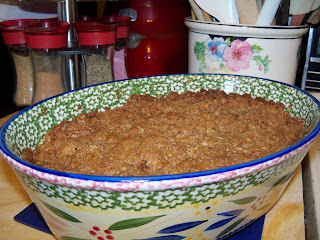 Preheat oven to 350º.  Put apple slices in ceramic baking dish.  (I didn't grease, but you can.)  Combine oatmeal, brown sugar, cinnamon, and Earth Balance in a food processor.  Pulse until crumbled.  Spread over apples.  Bake for 40 minutes.  Enjoy warm plain or with vegan vanilla ice cream. 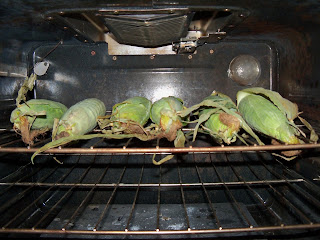 After the Apple Crisp was done baking, I got really serious about dinner.  I peeled some potatoes for mashed potatoes made with unsweetened Almond Breeze.  I served those with some Tofurky gravy. It's my first time having Tofurky gravy and it was pretty good.  I also threw 6 ears of corn into the oven to roast at 350º for about 30 minutes.  I used the instructions that I found on Susan Voisin's blog for Oven-Roasted Corn-on-the-Cob, but really, it's just literally throwing the corn in the oven.  I pan fried some vegan Chicken Scallopini to go with it.  Finally, I threw some rolls into the oven to warm.  The entire meal was very tasty! 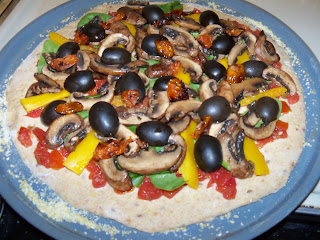 Earlier this week, I made a vegan veggie pizza.  First, I cleaned and sliced some baby bella mushrooms and sauteed them.  Next, I cut a yellow bell pepper into strips and some black olives in halves.  I used half of a container of whole grain pizza dough I had bought at Whole Foods.  I rolled it out very thin.  I drained a jar of the Bruschetta in a Jar that I canned a couple of weeks ago and put it on the pizza.  I followed that with some fresh spinach leaves, the mushrooms, yellow bell peppers, black olives, and the Zuma Grape Tomatoes that I had roasted and frozen a month ago.  I let it bake at 400º for about 20 minutes.  It was mighty tasty!

Tomorrow, I think I will cut the seedless watermelon into cubes and made Watermelon Sorbet with half of it.  I really enjoyed that.  It is quite the refreshing frozen dessert.

Since I may have lost all of my pictures from last September until now (yes, it's been a year since I backed up my PC ... I've learned my lesson!), I thought I'd take some more pictures of the girls, but from their level.
First I took Jordan, and she wasn't really happy about it.  She really HATES getting her picture taken. :)  But she posed pretty and looks so regal, that the picture is a winner!
Kobe usually doesn't mind getting her picture taken, but she was upset with me, so she wouldn't look at me.  After Kobe's anterior crucial ligament surgery, she was still limping a bit and the vet put her on DuraMaxx to control the pain.  DuraMaxx has some less desirable side effects.  One is depression or restlessness.  I believe Kobe has that and licks her paws to relieve some of it.  I think she's been licking them until they are raw.  I had been fussing at her to stop licking her paws right before I snapped the photo.

I've taken her off of the medication for now and will keep her off of it for a few days (she only takes 1/4 pill, so she's on the minimum dosage).  She didn't have this problem until she was on this medication for such a long period.  If it stops the problem, I will ask the vet to change her medication to something else.
Here's a classic picture.  One, Kobe is licking her paw ... ugh!  But the reason this is a classic is that Jordan is always backing up on Kobe and putting her behind in Kobe's face.  I swear it's an act to try to establish dominance.  Jordan is a nut!

I hope I can recover all my pictures from the last year.  bah!  PC problems!  They drive me nuts! :)