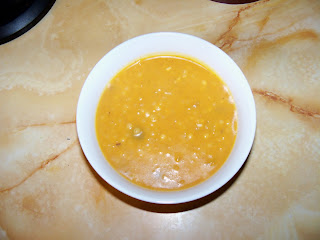 I needed to use the butternut squash that I roasted the other day.  I didn't want to make a risotto, although I think that's what I should have done as I love winter squash risotto.  Instead, I was trying to find a soup that I could make.  I ended up settling on a recipe from VegWeb.com called Butternut Squash and Couscous.  This would be my first time making couscous. 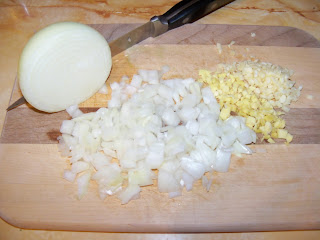 I chopped the onions and minced the garlic and ginger.  Then, I sauteed them for a few minutes and added a fruit medley.  I was going to use a craisin/raisin blend, but I had a bag of mixed fruit that I needed to use.  It contained papayas, pineapples, raisins, and bananas (which I picked out).  (In hind sight, the fruit medley would have been perfect in a rice pudding.  Go figure that occurs to me now!) 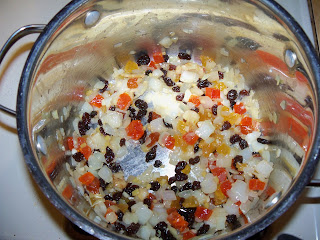 I sauteed that mixture for a bit and then I added 1/2 teaspoon cinnamon, 1/8 teaspoon allspice, and 1 teaspoon (at least) of freshly grated nutmeg.  I sauteed that for about 30 seconds and then added 2 1/2 cups of water and the couscous. 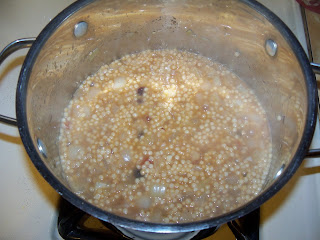 Since my butternut squash was roasted, I didn't need to complete the step to let it simmer until tender.  I thought I'd up the spices and add a few more to give it more of a sweet and savory type of taste.  I decided I didn't want it to be a thick pasta dish, but rather a creamy soup.  So, I added a handful of garbanzo beans, 1/4 cup of SO Delicious Coconut Milk Creamer, and about 2 cups of water.  The "soup" (very thick soup) turned out too sweet, not enough savory.

I ended up putting a squirt of Sriracha in my bowl and that helped, but it was still missing something.  So, I added 1 teaspoon of red curry paste and about a teaspoon of Sriracha to the pot.  That was more like it.  It's much better now.  However, in the future, I'll leave out the fruit all together.  I'm not a fruity soup person and would have never thought to add it before reading the recipe on VegWeb. I also didn't care for the minced ginger.  If it was grated, that would have been better.  The ginger flavor was too strong when biting into a small cube of ginger.

While I won't make this soup exactly the way I did today, I will try making a butternut squash soup again.  I love winter squashes.  I'm glad I experimented as it brings me closer to finding the exact spice ingredient combination that is perfect for me.

Today, it is cloudy with a temperature in the lower 50's with a wicked wind whipping around.  I took the girls for a walk at Lake Katherine today, which is our favorite place to walk.  However, I under-dressed because I'm thinking 50's, not 30's or 40's with the wind chill.  Brrrrr!  We only walked 1 mile and then came home.  (Our norm is 2 miles.)  I guess that 1-mile walk was enough to tucker the girls out, because here they are this afternoon. 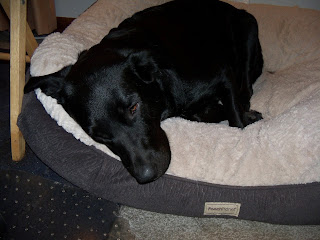 Kobe is in the dog bed, which she OWNS and has actually pushed Jordan out of when Jordan had the "nerve" to lay in it the other day.  Jordan is in the rocker/recliner, which she owns. ha! 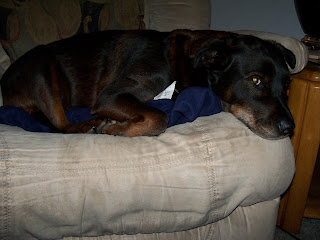 They've been in these positions for the last hour at least.  They need to rest up because tomorrow morning, we'll be back out there walking our 2-miles and I will be dressed more appropriately!