My Week and Veggies 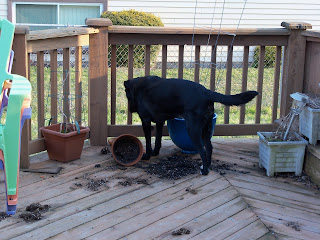 I begin with a picture of Kobe Bean who is proudly standing over the mess that she and Jordan have made on the deck.  They are always quite proud when they can tip over a pot of dirt or drag the kiddie pool off of the deck and fill it with a million little tooth puncture marks.  Yes, I will be getting a new pool for Kobe this summer.  :::smile::: 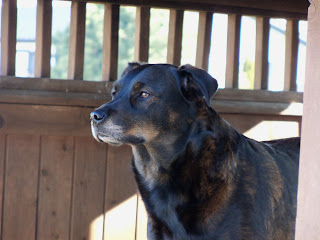 I continue with a picture of Jordan standing on the hot tub enjoying the morning out in the sun and fresh air.  Skittles, the Yorkie, is somewhere in the house snoozing. 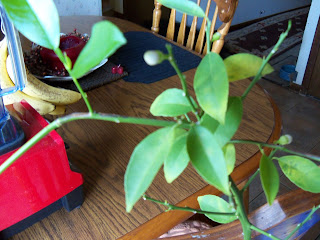 Next, I present a picture of my lemon tree.  I'm in the Chicago area.  Winter is NOT friendly to citrus trees.  I've had the lemon tree for almost (not quite) two years.  The first year, it had about a half dozen leaves.  Last summer, it had a growth spurt and was filled with new leaves and branches.  That is, of course, until I brought it in the house and left it in my kitchen for the winter.  The French doors in my kitchen face north, so there is no direct sunlight. 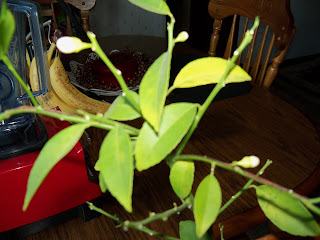 I don't really have a good window for the plant, so I was going to take it into my office and leave it there.  (I have a wall full of east windows that I thought would be great for it.)  However, that never happened.  I needed to top off the dirt and then it was absolutely freezing in Chicago, so I was afraid of shocking (and killing) the tree.  I have the fluorescent light bulbs in the kitchen, and they must have given the lemon tree more light than I imagined, as it didn't drop "ALL" of its leaves, just most of them. 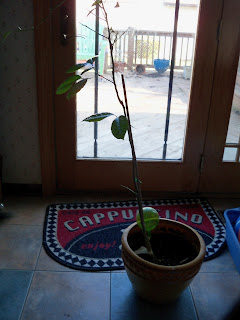 So, I'm looking at the plant about a week ago and see tiny bumps that look like buds.  There are 5 of them.  I'm thinking, "Could these possibly be lemons?!?!?!"  I really doubted it as the tree has been in my kitchen dropping leaves all winter.  A week later, I am sure ... my lemon tree has 5 lemons growing on it.  This "tree" is pretty much just a branch and if it was on a Charlie Brown cartoon, it would be the summer equivalent of his Christmas tree.  We'll see how this goes. 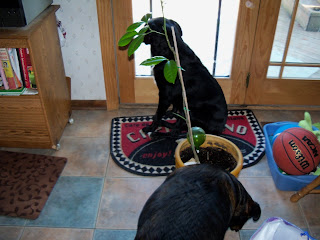 As you can see, the lemon tree is a pitiful tree, but it is growing some fruit.  How amazing is that?!?  I'll post a few progress pictures as the lemons get bigger. 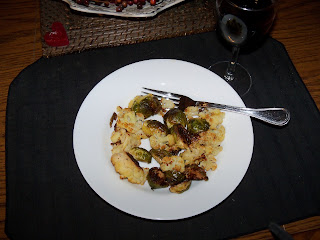 OK, so I actually did cook this week.  I roasted a head of cauliflower (that had frozen in my bottom produce drawer of my fridge) and a pound of Brussels sprouts.  I drizzled a couple of tablespoons of olive oil over them and sprinkled them with sea salt, black pepper, cayenne pepper, and smoked paprika.  I roasted them at 400º for about 40 minutes, stirring after 20 minutes. 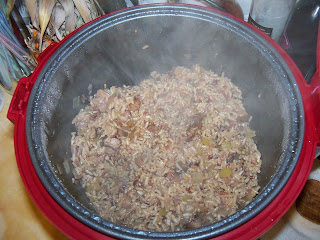 Meanwhile, I made Brown Rice with Vegetables in my new multi-cooker.  It is a rice cooker (separate cycles for brown and white), slow cooker, and a steamer.  :)  I sauteed onion, celery, and mushrooms (baby bellas), and then added 3 cups of a brown rice blend (love mixing up those brown rices), water, and one no-chicken and one low sodium veggie bouillon cube.  After the rice was done cooking, I added about ¼ cup of finely chopped raw pecans and ½ cup of craisins.  This is a variation of one of the recipes that came with the multi-cooker.  I had to change some of the ingredients to vegan versions and I added baby bellas. 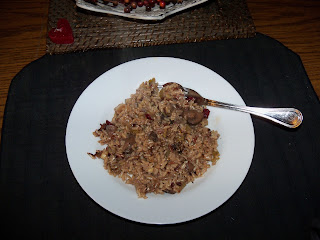 The cooking cycle for the brown rice is much longer than I anticipated.  Evidently, the multi-cooker cooks it at a lower temperature for a longer period of time.  The rice turned out absolutely wonderful.  Now that I know the cooking time is longer, I'll be able to adjust my cooking coordination so that everything is done at the same time.  Although I ate the dishes separately, they were both extremely tasty ... even as leftovers for lunch at work the next day.
Posted by Lori at 9:15 AM