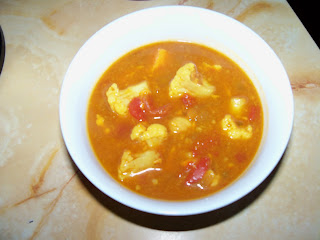 I've been meaning to make Curried Cauliflower and Sweet Potato Soup for a couple of weeks now.  But, one thing led to another and I never got around to making it.  However, today is the day.  I thought I had everything I needed except cumin seeds.  So I thought I'd just use ground cumin instead.  Much to my surprise, I did not have a pepper to put in it (I used dried jalapeno), but I did have cumin seeds.  HA!  I forgot I had ordered some from MySpiceSage.com when I was ordering a few Indian spice blends.  I ordered those to make some roasted veggies, but that hasn't happened yet.  I have used some of the spices for other things. :) 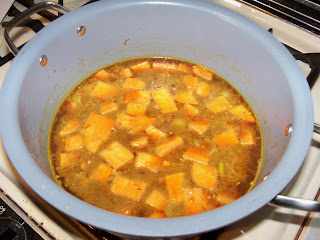 The soup is fairly easy to put together.  It cooks in two stages.  After sauteing some onion, adding some spices and giving it another quick minute, I added diced sweet potato (I used a red garnet yam), some vegetable broth (low sodium), and some curry powder.  That simmers until the sweet potato is tender. 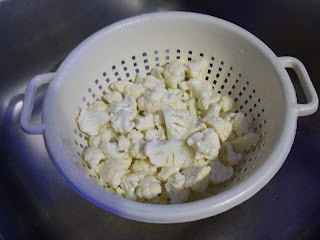 While that was cooking, I cut up my cauliflower into bite-sized pieces and rinsed it.  I grabbed a can of diced tomatoes in sauce from my pantry and a cup and a half of frozen garbanzo beans from the freezer (love that pressure cooker for cooking up the beans). 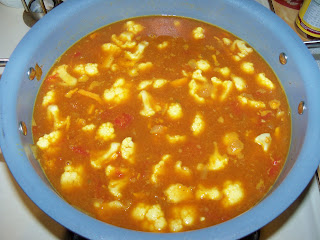 I added the beans, cauliflower, and tomatoes with more curry, 1/2 teaspoon of cayenne pepper (I upped it from 1/4 teaspoon since I had no pepper earlier), and 1 1/2 tomato cans full of water.  (I thought I'd get all of the sauce out of the can.)  Then I simmered the soup covered for a few more minutes until the cauliflower is tender.  VOILA! The soup was ready to eat. 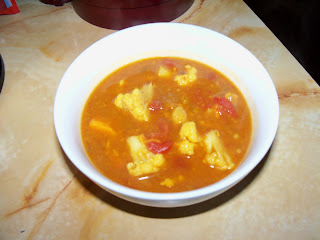 Overall, this is a good soup.  I am glad that I added the extra cayenne pepper.  The next time I make this, I'm going to play with the spices and use one of the blends that I have on hand in place of some of the curry.