My 21 year old son asked me to fix a vegetarian meal for dinner.  I was very surprised because I didn't think he had fully recovered from the vegetarian lasagna.  LOL  He must have, though, as he texted me and asked me to make a vegetarian meal and to be creative.  Of course, this was while he was having a Sonic burger with his father.  Out of all of the fast food restaurants, that is on my least favorite top 5 list.

So, I spent and hour or more trying to decide what to make.  I have never made veggie burgers.  In fact, I've only had one veggie burger in the past decade (lifetime?).  I had a Boca Burger.  It was OK.  (I bought a box of 4 a couple of months ago and I think I still have 3 left.) But, I wanted to make something from scratch.  I "binged" for veggie burger recipes and found some great websites and blogs in the process.  I finally settled on the Ultimate Veggie Burger Recipe posted on 101 Cookbooks. 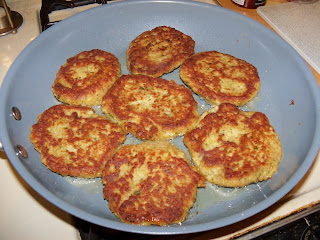 I don't think  my burgers look quite like the ones on the 101 Cookbooks website, and they certainly were not thick enough for me to slice through the middle and add things into them, but they were good.  The recipe said to make 12 burgers 1½ inches thick.  I think they would have been the size of silver dollars then.  I only made 8 burgers that were about ½ inch thick.  They were still small.  I had mine with mustard and romaine lettuce on a very thin whole wheat sandwich round.  (It was similar to a pita, but much smaller.)  My sons wanted cheese on their burgers.  One ate his with lettuce, the other ate his with mustard and ketchup, both had the burgers on the sandwich rounds. 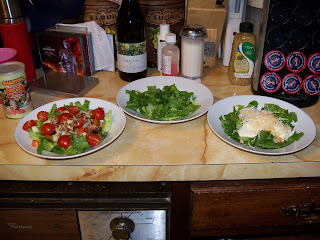 While I prepared the salad for tonight's meal, I also chopped veggies for my salads for this week.  I love taking a salad to work for lunch.  I love my Vidalia Chop Wizard.  We had leftover veggie burgers, too, so there will be some of those for a dinner this week.

I've found that eating vegetarian and vegan requires a lot more work and preparation for a meal.  To get really good quality meals, many will need to be homemade from scratch.  I like to cook.  However, this is going to require a whole new mindset where food preparation is concerned.  Most of the recipes I review have TONS of ingredients.  Take the burgers tonight...I needed lemon zest (thankfully, I zested both the lemon and the lime from yesterday's water and froze the zest), and other ingredients I normally don't have around the house (alfalfa sprouts and fresh cilantro).  Then, there is all of the chopping and dicing.  I did use my food processor, which hasn't gotten used enough, so I do think this way of eating will help me to fully appreciate all of the kitchen gadgets I've accumulated over the years.  It made quick work of chopping the cilantro, alfalfa sprouts, and onion into smaller pieces for a smoother, more uniform burger.

So, my next adventure should include something with tofu.  I bought some tofu tonight.  I also bought two mangoes.  I want to find something to make with them, too.  Life is interesting!
Posted by Lori at 9:41 PM