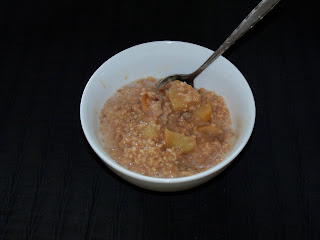 So, it's day one...again!  I have vowed to eat healthier over and over again.  Don't get me wrong, I'm not a total failure.  I eat more vegetables and fruit and much less meat.  I absolutely love salads without any cheese, eggs, or meat.  I drink mostly water and little to no pop.  Once in a blue moon, I'll have a Coke or Pepsi, but it's rare.  I even bought one of those pitchers that has a chamber to infuse your water with fruit.  Right now, I have nectarines flavoring my water.  I'm going to switch out the fruit today and make it with a lemon and lime combo.  I've also used it to infuse iced tea with fruit.  I made sun tea and then added it to the pitcher with strawberries.  It's a nice way to get more water with a little flavor.  But food wise, I have been caving when I fix my sons' dinners.  I just haven't been into cooking for them and for me.  Lately, more and more, I have been craving healthier food.  So, it's time to try it again. 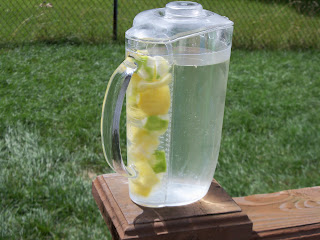 I belong to a Yahoo! group called Eat To Live.  Mostly, I like the group, but some of the members are extreme and feel they can give medical advice to people being treated for disease by their doctors via Internet posts that should supersede the doctors' advice.  Some are self-righteous and jump on everything they "deem" to be outside of what they think should be discussed in the group.  Mostly, I just read and delete.  I don't feel it's a very supportive group as mostly, the people think if you aren't eating vegan, you are wrong.  It seems as if you have to be a purist or striving to become a purist to be fully accepted in the group.  Sometimes, I get great ideas for new foods or vegetarian/vegan substitutes for dairy or meat items that actually taste good.
I don't know if my goal is to eat vegan.  My goal is to eat healthy and eliminate most meat from my diet.  I've already eliminated most dairy.  I don't eat cheese on sandwiches or salads.  OK, I eat it on pizza, but I haven't found a good vegan alternative for it yet, although someone suggested Daiya in the Yahoo! group.  I even have almond milk in my fridge to eat on my cereal. That being said, I won't give up my fat free half and half for my morning coffee.  To do that, I'll have to gradually wean myself to drinking my coffee black.  And personally, my morning cuppa joe is a thing of pleasure for me and I hate having to mess with it.
If you have gotten the impression that I'm conflicted about this whole eating healthier thing if it means I have to become a vegan, you're right.  I think what I need to do is find a compromise for myself.  And I'm working on that.  I think by eating healthier more and more, I will eventually find a balance I'm comfortable with.
So, today is DAY ONE ... AGAIN!  LOL  And for breakfast, I made Steel Cut Oats.  I always think these smell better than they taste, but these are pretty good.  Here's what I did.
Steel Cut Oats with Apples and Spices
1/2 cup steel cut oats
2 cups water
1 teas. vanilla extract
1 teas. cinnamon
1/4 teas. almond extract
1 Gala apple, (skin on) diced (or use your favorite apple)
1 teas. organic Amber Agave Nectar
I put everything in my rice cooker (basic with only keep warm and cook settings).  I hit "cook" and let 'er rip.  I've also used a cup of frozen peach slices, or a cup of fresh or frozen cherries (halved), or a cup of frozen blueberries (add these later in the cooking process).  Instead of the Agave Nectar, you can use a tablespoon of brown sugar or pure maple syrup or you can leave that out and add a sweetener to your taste when you eat it.
The picture at the top is my breakfast this morning with a small amount of almond milk added.  I didn't add any additional sweetener as it turned out sweet enough. I actually think that almond milk is sweeter than cow's milk and that it added a hint of sweetness to the oats.  The longer it sat, the sweeter it tasted as it absorbed the almond milk.  This made enough for me for two breakfast meals.  I ate half and saved half to have tomorrow or Monday. 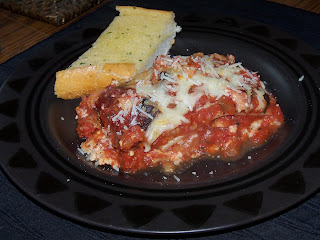 Tonight, I'm baking the vegetarian lasagna I made a couple of days ago.  The electricity went out right when I was going to pop it in the oven.  I made it with ricotta cheese mixed with Parmesan cheese and will sprinkle a bit of mozzarella on it before I bake it.  We'll have garlic bread with it.  OK, so that has cheese in it.  So shoot me!  I'm not a vegan yet.  :::chuckle:::
Posted by Lori at 11:12 AM