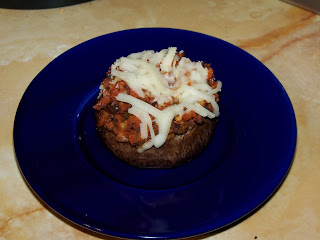 I had a few mushrooms left from my visit to the Farmer's Market on Sunday.  I had spied a recipe for Stuffed Mushrooms on the Seitanic Vegan Heathen blog.  I thought it looked pretty good and pretty simple.  I decided that tonight, I'd be making these mushrooms. 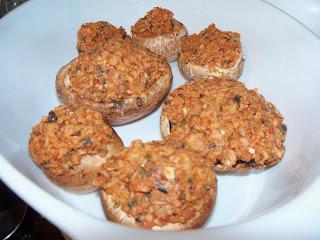 I removed the stems and chopped them up and added them to the TVP mixture.  I added more spice than was in the recipe on Seitanic Vegan Heathen's blog, so I'm going to list what I did.  Mine have a bit of ZIP from the spices. 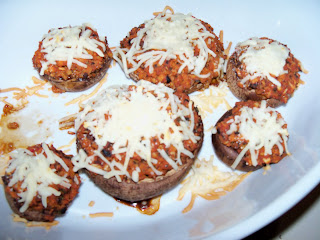 Here's what I put in mine:

I let the stuffing mixture sit for 10 or 15 minutes so the TVP was fully re-hydrated before I stuffed the mushrooms.  I put them in a ceramic baking dish and covered it with foil.  They baked for 20 minutes.  Then I removed them from the oven and put some vegan nozzarella on it.  I like Follow Your Heart, but many people like Daiya.  I don't care for Daiya at all, so really, use what you like best.

Overall, these were good.  I think the mushrooms dried out too much.  I'm not sure why that was.  I did end up putting about 1/4 cup of veggie broth in the dish and cooking them a bit longer to see if that helped.  It did.  If I make any kind of stuffed mushrooms again, I'll roast the mushrooms first before adding the stuffing, which really just needs to be heated through.  Personally, stuffed mushrooms aren't my favorite way to eat mushrooms, but it is good for a change.
Here's my girl, Kobe Bean.  She's playing it cool, trying to look disinterested even though she's laying smack in the middle of the floor right in my way.  I suspect she's waiting for a tasty morsel to drop.  No such luck tonight!
Posted by Lori at 9:25 PM