What Took Me So Long? Vegan Yogurt & Granola

Who buys a yogurt maker on September 21, 2013 and waits until August 29, 2016 to make her first batch of yogurt?  I mean really, after 3 years, wouldn't you think that the yogurt maker should go in the Goodwill box?  I hadn't even opened the box to look at it. 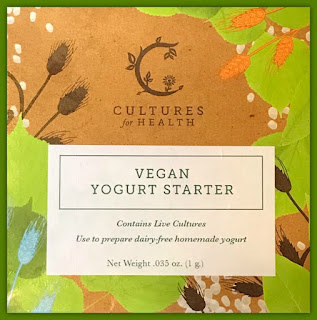 In August, I decided I would dig out the yogurt maker and make vegan yogurt. It seemed like I read 100 recipes and tips articles, but I'm sure it wasn't that many.  I finally decided on one recipe that heated the soy milk (Edensoy or WestSoy - the kind with only soy beans and filtered water in it - no other additives). It was very easy.  This recipe used cornstarch as a thickener and I'll admit, the yogurt was very thick.  I thought I cooked it too long (10 or 11 hours) as it was a little sour for my taste, but it turns out, that's just because I wasn't used to the flavor.

My vegan yogurt starter expired in February 2014.  YIKES!  Turns out, it stays good indefinitely in the freezer.  I have used it for every batch of yogurt I've made except one where I added 1/2 cup of my yogurt instead as the starter.  Good thing the starter is still good - I have those two boxes to use up!

I tried another recipe using Arrowroot Starch for the thickener.  It turned out OK, too, but wasn't as thick as cornstarch.  Then I read another recipe and the author said she uses no thickeners and doesn't heat the milk before culturing.  She just adds 1 capsule of vegan probiotic (the refrigerated kind) to the milk and then cultures it.  That sounded great to me ... BUT ... I still have these 2 boxes of vegan yogurt starter.  So, I dumped a box of soy milk in my Pyrex bowl, added an envelope of vegan yogurt starter, and threw it in the yogurt maker for about 11 hours.  VOILA!  It's not as thick as when I use a thickener, but it's not soupy either.  Honestly, it's thick enough for me.  It's a softer set, but still delicious and perfect for granola or protein shakes. I've made it this way several times now and it's the only method I'll use.

Now, instead of making yogurt in the little jars, I make it in a 7-cup Pyrex bowl so I can just dish out as much as I want into a ball jar to add a bit of fruit and granola.  Those little jars are great to only eat yogurt as they are big enough to add fruit to, but they are not big enough to add anything else. To flavor the yogurt, I have been adding a teaspoon or so of fruit butters that I made (blueberry butter and peach butter).  I also add fresh fruit.  I've been on a kick of adding 1/2 cup of granola to the yogurt and having it for lunch.  It's good and filling. 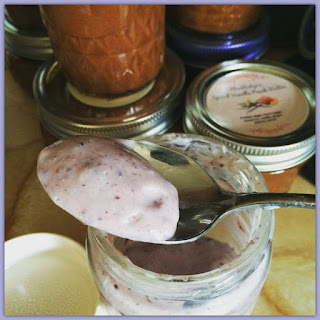 I've been buying granola in bulk from Whole Foods or the Health Food Store, but I don't know what's in the granola and I like the idea of making my own.  It's taken me a couple of months to actually attempt to make granola ... enter today.  I have been collecting granola recipes in Pinterest waiting for the day I was ready to make granola.  I ate the last of my health food store granola for lunch, making a perfect opportunity to move forward. 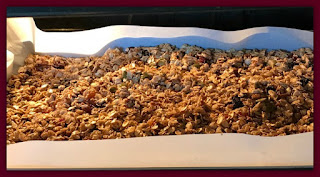 I used a simple granola recipe and made it my way.  It has smelled heavenly cooking.

Wet ingredients; mix together.
1/3 cup vegetable oil (I used canola because I didn't have coconut on hand)
1/3 cup agave syrup (or could use pure maple syrup)
2 teaspoons vanilla extract (homemade of course)

Now, I only need to start using the yogurt cheese maker to make vegan yogurt cheese and vegan Greek yogurt.  BUT, I only purchased it on August 31, 2016, so I have time yet.  ;)